Housed in a three-storey private property in a cosy residential estate along Yio Chu Kang Road, Little Footprints Preschool @ Yio Chu Kang offers a homely environment for our children throughout their preschool years.

With a mix of open concept and dedicated classrooms, our learning environment is designed to be conducive for children from playgroup and kindergarten 2 as they learn, collaborate and form friendships along the way.

Our centre also features a spacious outdoor area with a lawn and kid-friendly vehicles for our children to explore during their playtime. Occasionally, our teachers also take the opportunity to bring their lessons outdoors for a change in environment and to expose our young ones to a variety of settings as they learn about the world around them. 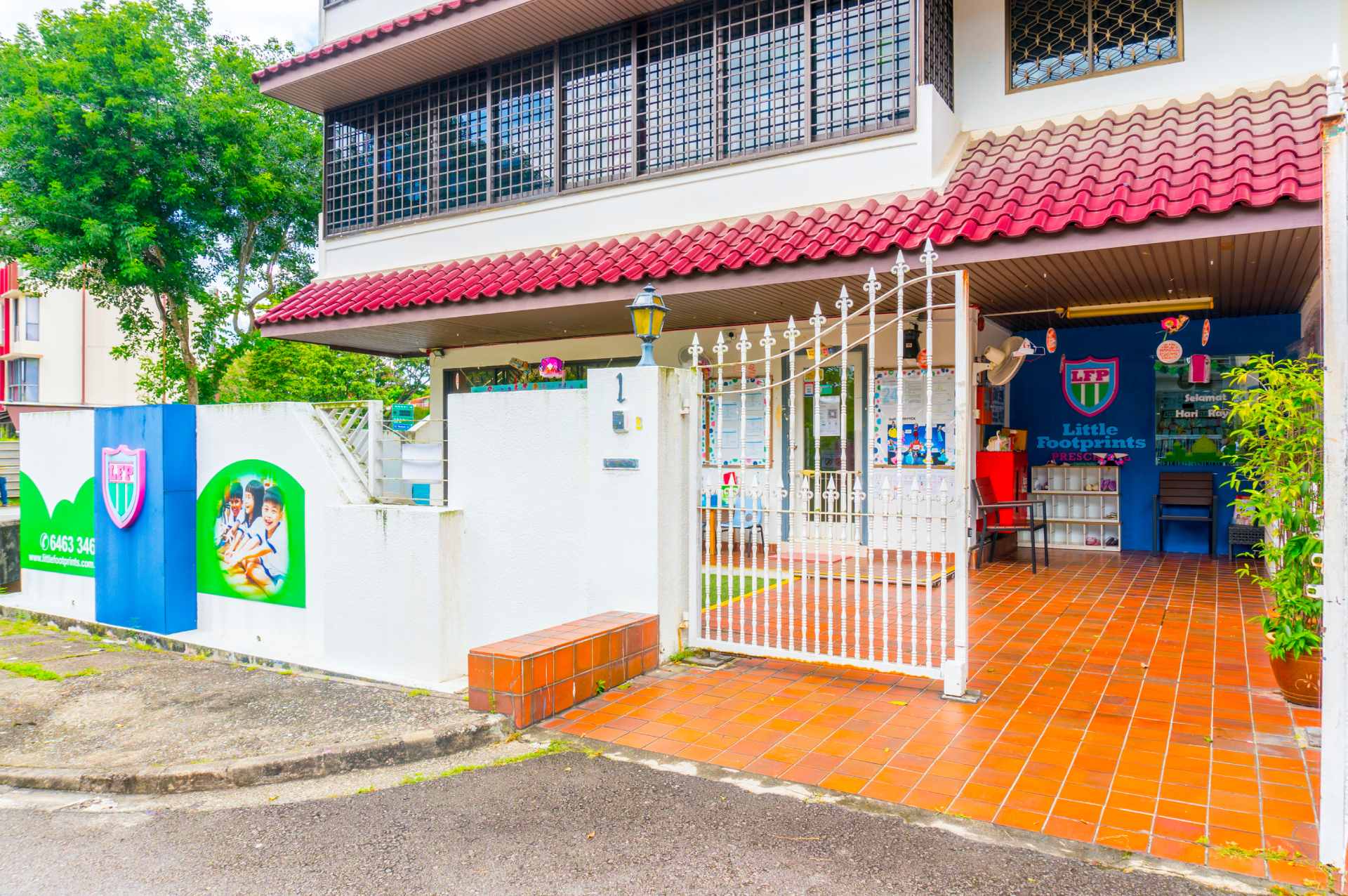 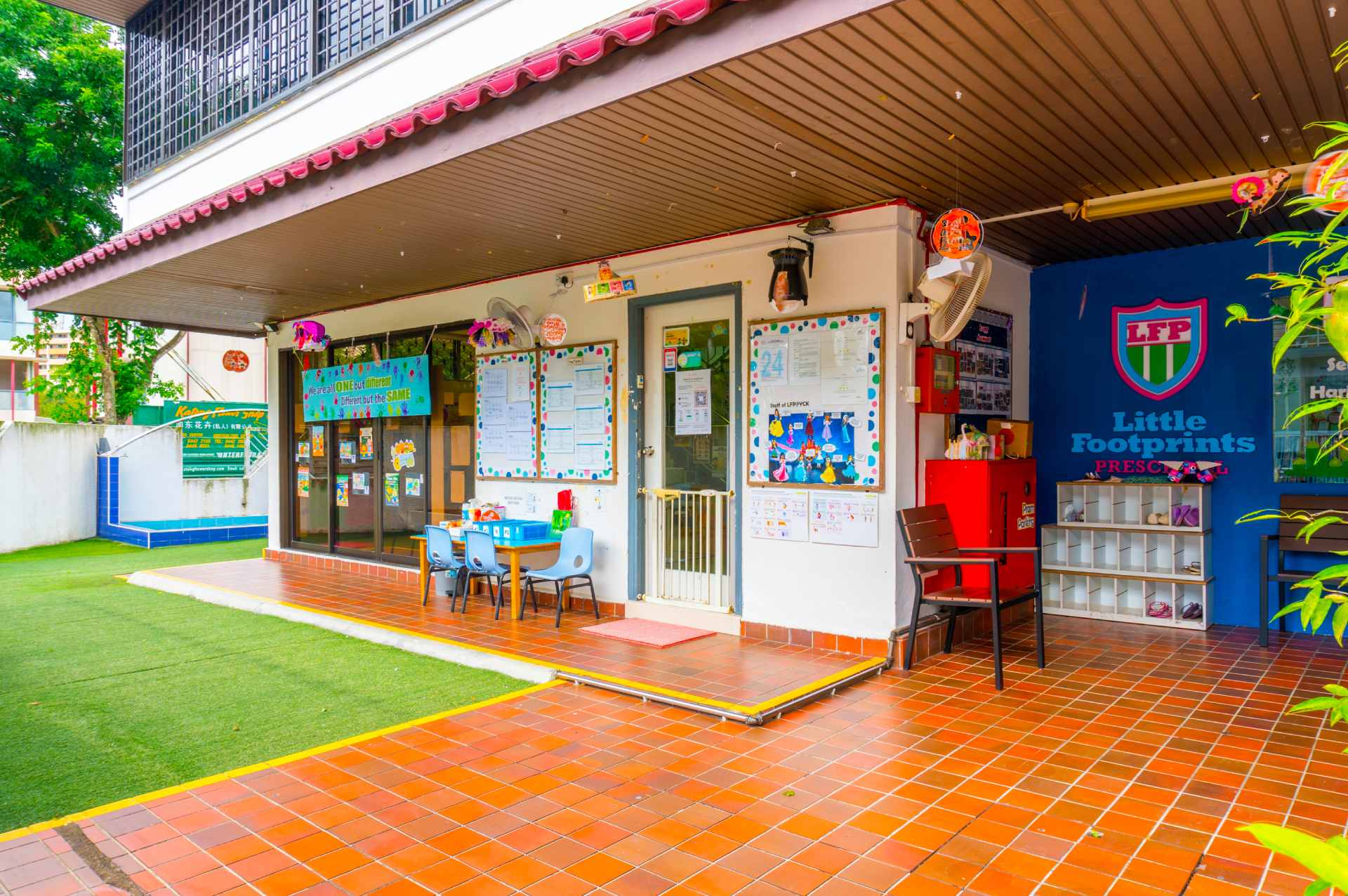 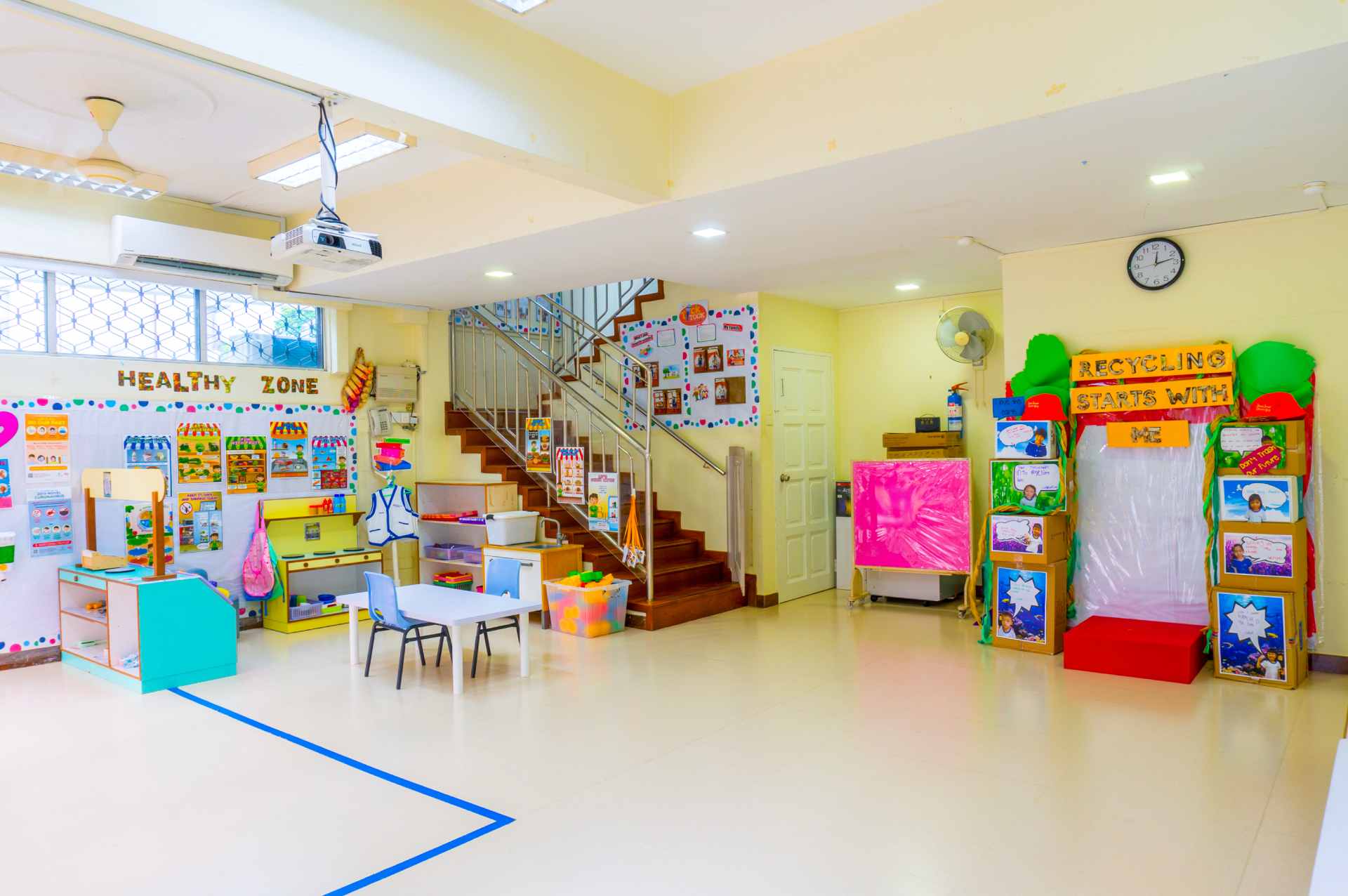 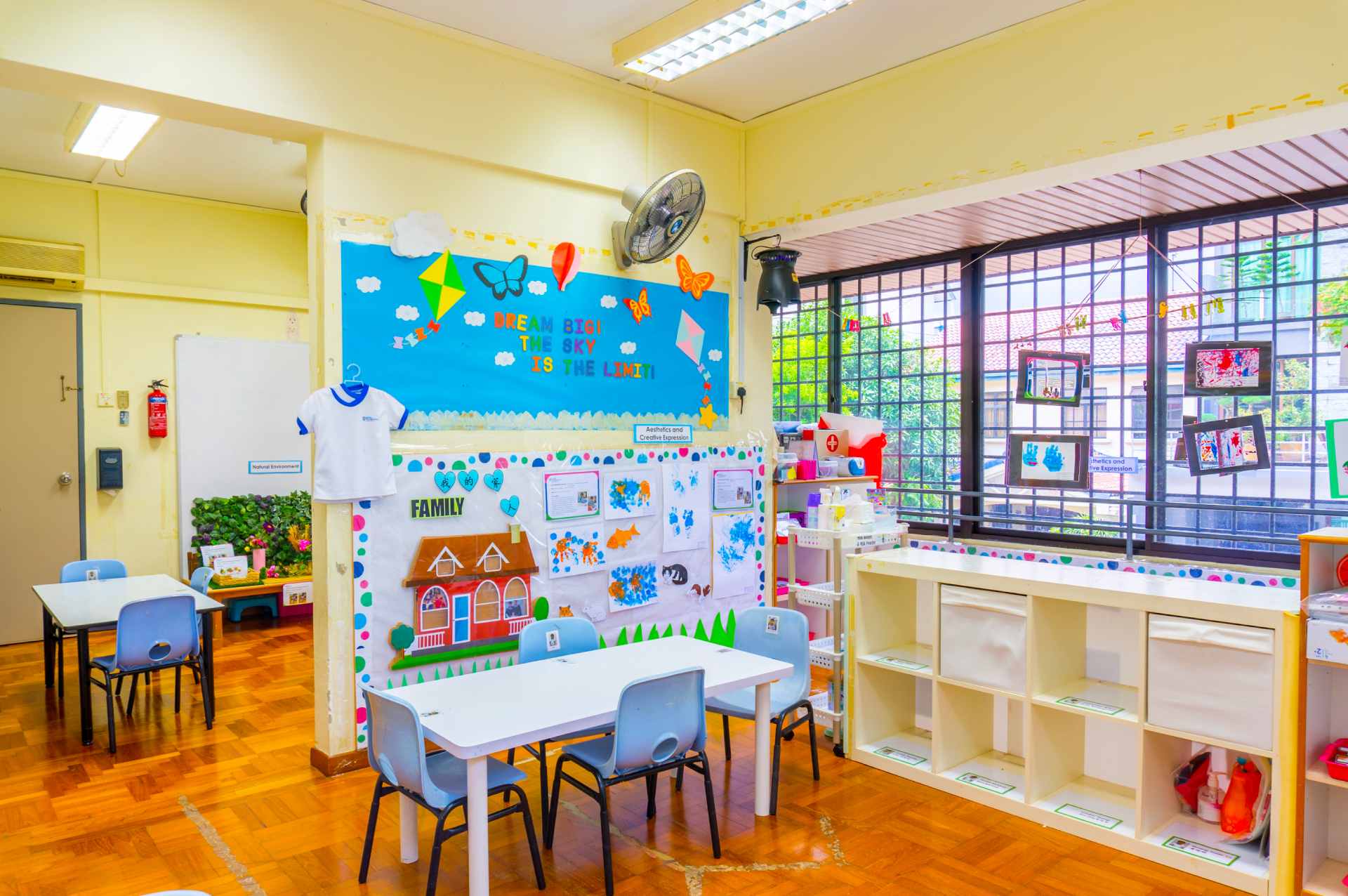 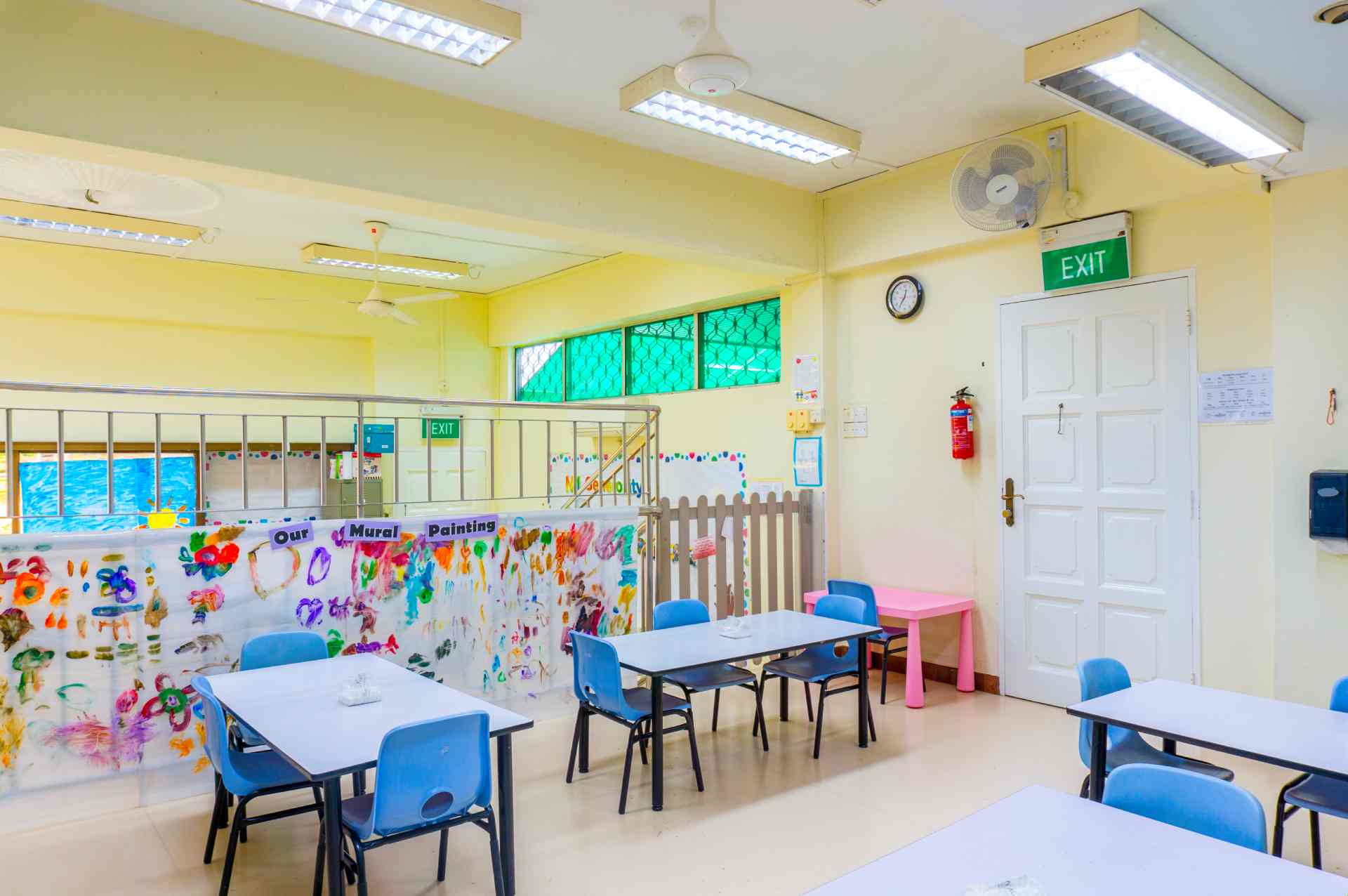 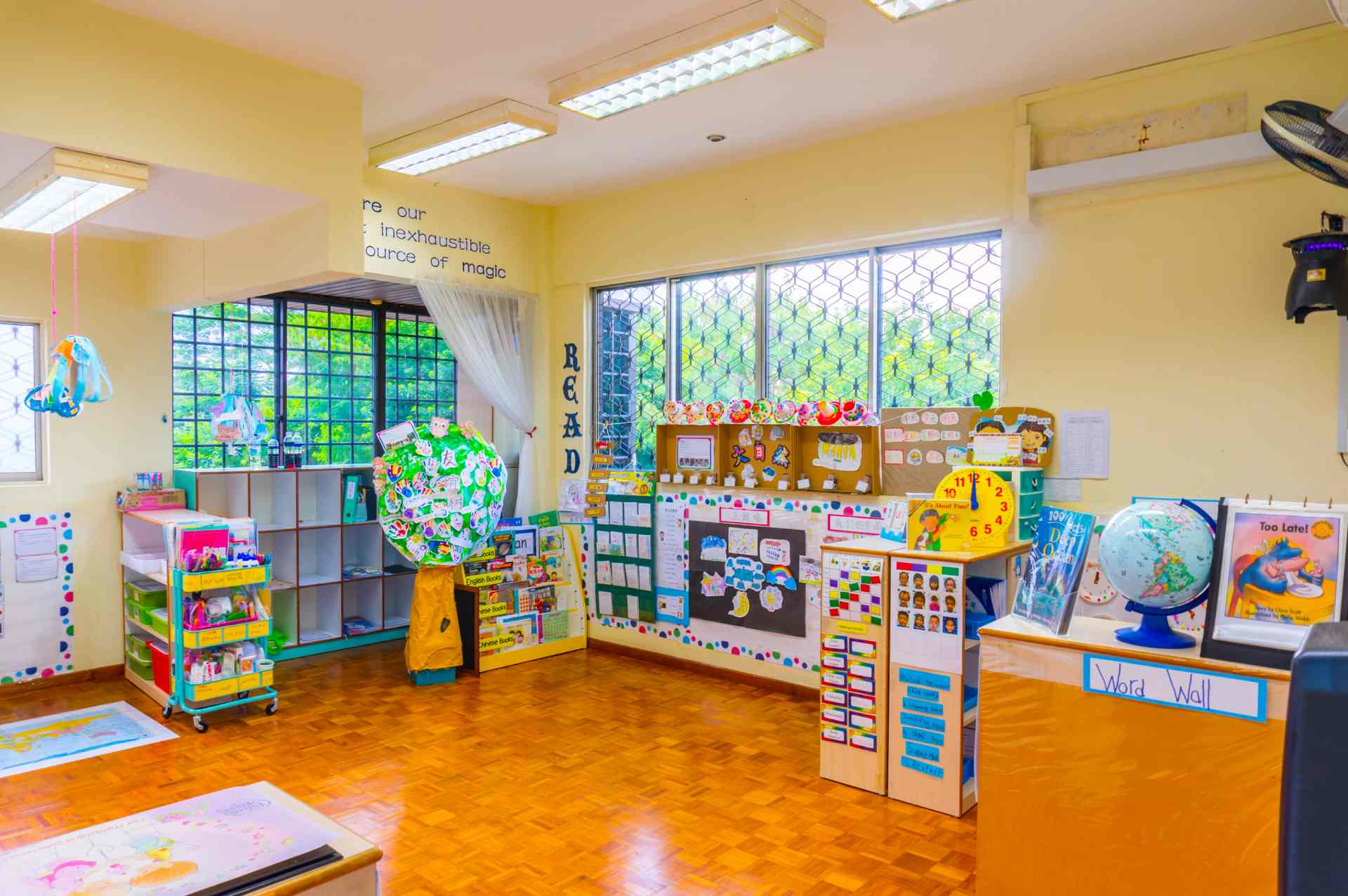 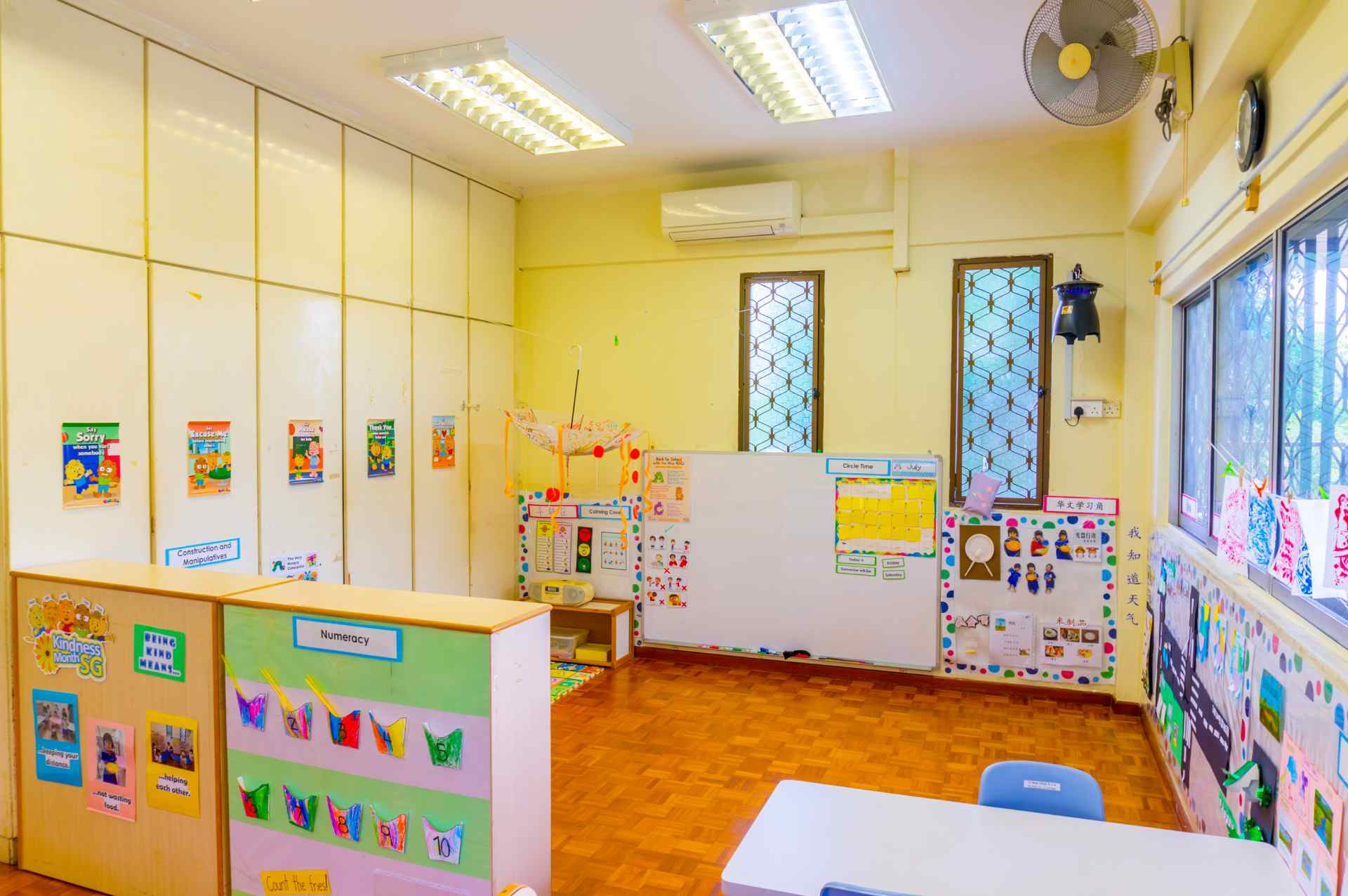 How to get there

Hear from our happy parents 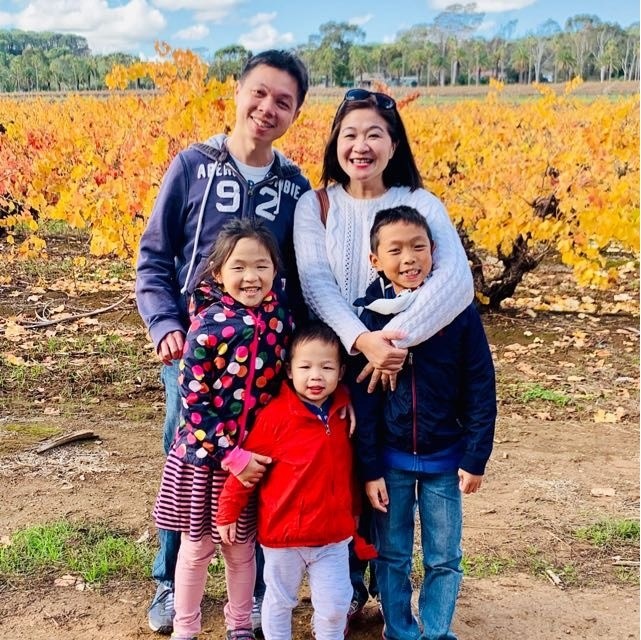 Josiah absolutely loves schooling experience. He is always chattering about his friends and what they have been up to. He is also very independent and understands his responsibilities and does his best to do them well.

The teachers are definitely the strongest asset of Little Footprints Preschool @ Yio Chu Kang. They are always so kind and generous towards the children. Josiah always comes home excited about the games he played today while learning. I completely trust Josiah's welfare and growth with the hands of this team of amazing and capable teachers. 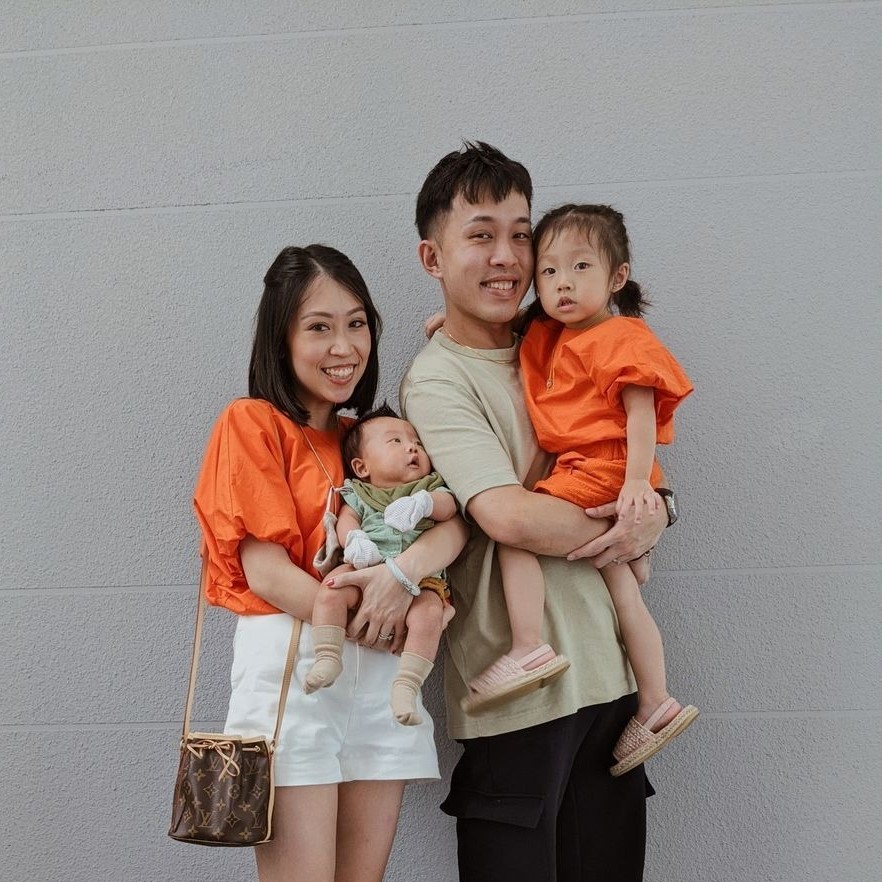 Jaelyn became more independent and sociable after attending school. She also improved in her articulation of words and began forming sentences. She has also learnt creative ways of expressing her feelings and emotions.

The interactions with teachers and principal have also been pleasant thus far. We get updates from teachers regularly and they have been responsive to any queries that we may have.

We were glad to have sent Jaelyn to Little Footprints Preschool @ Yio Chu Kang and will definitely send our second child there as well.

My twins started attending Little Footprints in November 2020. Some changes that I have noticed is that my girl started to enjoy learning Mandarin. She and her brother have never learnt Mandarin before, hence it was a bit of shock when she attended the school the first few weeks. She is now happily studying Mandarin at school and home. She also begun to show leadership skill and become more independent and confident. My son Zachary is improving in his soft motor skill. He can now button his own uniform, do easy craft and is better at writing too. The things that I like best about the centre is how firm they are in implementing health measures.

I also admire the dedication of teachers - being approachable and friendly towards parents. My experience with teachers is pleasant, specially with the ones that are currently teaching my children, Ms Praise and Lao Shi. They are open for dialogue, caring and nurturing. My children love them. The principal Ms Jerrica is firm and helpful. Thank you very much to the team at Yio Chu Kang. 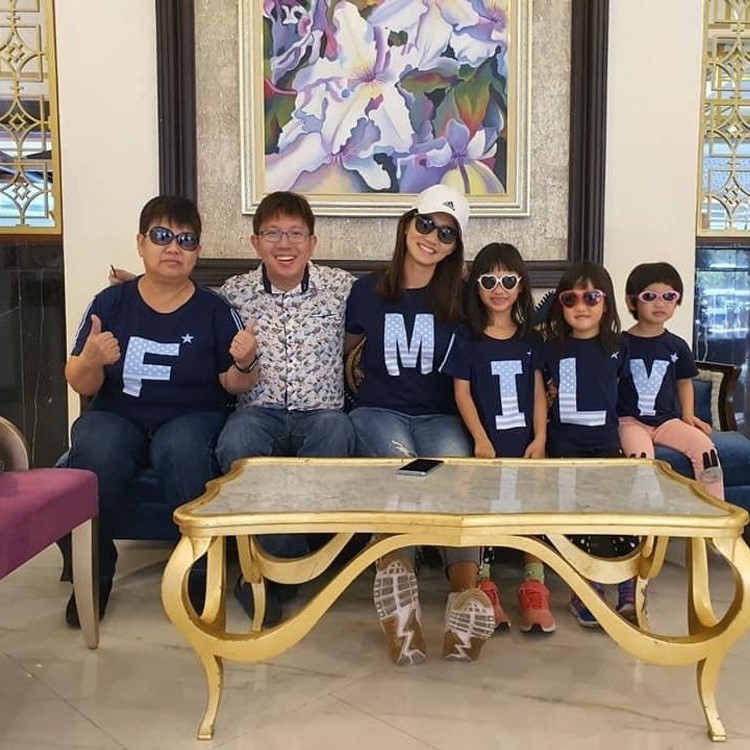 Chloe started school with Little Footprints @ Yio Chu Kang when she was 4 and Charlene started attending the school at age 3. When my children took a little longer to settle in, the teachers were very involved and patient in easing them into the new environment. They show genuine concern for the children's well being and will update promptly on their progress and happenings in school. The centre has very capable and engaging teachers.

My children often share with me how much they enjoy their classes and how the teachers make the lessons more interesting for them through games, hands on activities and story telling. As the school is a relatively small set up, it is heartwarming to know that the teachers and students know each other relatively well across levels, not just within their class/level.

After starting school, I noticed that my children became more independent in both thinking and actions. They also started to show more empathy, telling me about how they felt when their friends are sad or injured in school. The curriculum is well paced and well-thought of. I like that the school explores interesting enrichments for the students during curriculum, yet it is optional for parents to choose and decide if they want to sign their kids up and in which aspects.

Overall, we're glad and feel assured to place our kids in this school. 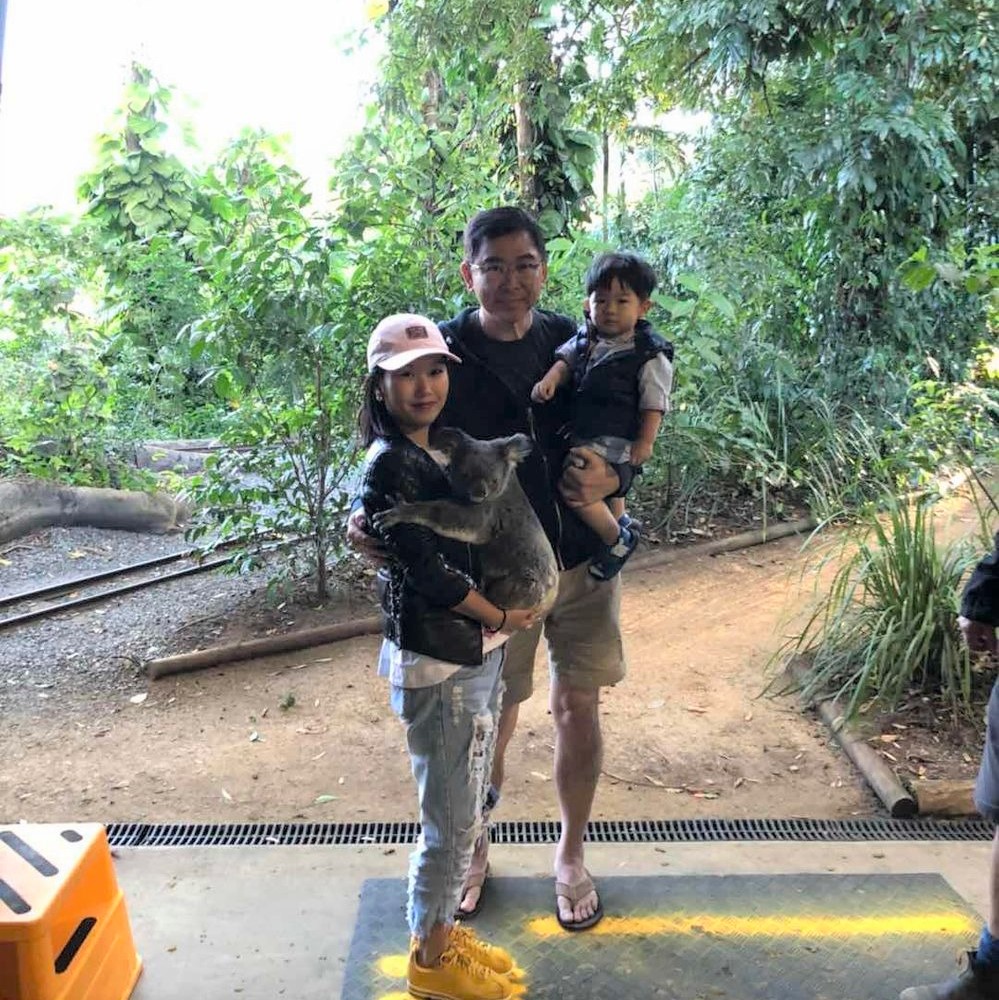 Choosing a preschool for Kyson was an important matter to us when we came back to Singapore. After much consideration, Kyson joined Little Footprints Preschool @ Yio Chu Kang. We meet the principal Ms Jerrica every day and she will pick up and drop off the children alongside the teachers. Kyson is fortunate to join Little Footprints Preschool (Yio Chu Kang) as the principal and the teachers are very passionate and attentive to each child.

Before returning to Singapore, Kyson was quite introverted and his speech developed at a later stage. When he first joined the centre, he only used simple repetitive vocabulary to communicate and his words were not very clear. Ms Jerrica is experienced and quickly noticed this. She raised this up to us promptly and gave very valuable suggestions.

Kyson often sat and watched other children playing and was not very involved. But after half a year, I have seen Kyson's tremendous progress. He has become cheerful and can quickly integrate into the new environment. He has made many good friends and took the initiative to play with his peers. His vocabulary has also increased greatly and has started communicating in simple clearer sentences. I often hear Kyson telling me that he likes his teachers.

In this six months, Kyson attends school happily every day. He looks forward to seeing his teachers and his good friends. At home, I will ask if he is happy in school, and his reply is always, "Happy!" He often shares, "l like Ms Praise. I like Teacher Zhang." As a mother, there is nothing happier than seeing my child full of vitality and joy every day! From the bottom of my heart, I'd like to thank Ms Jerrica and the teachers for providing a safe and joyful environment for Kyson. 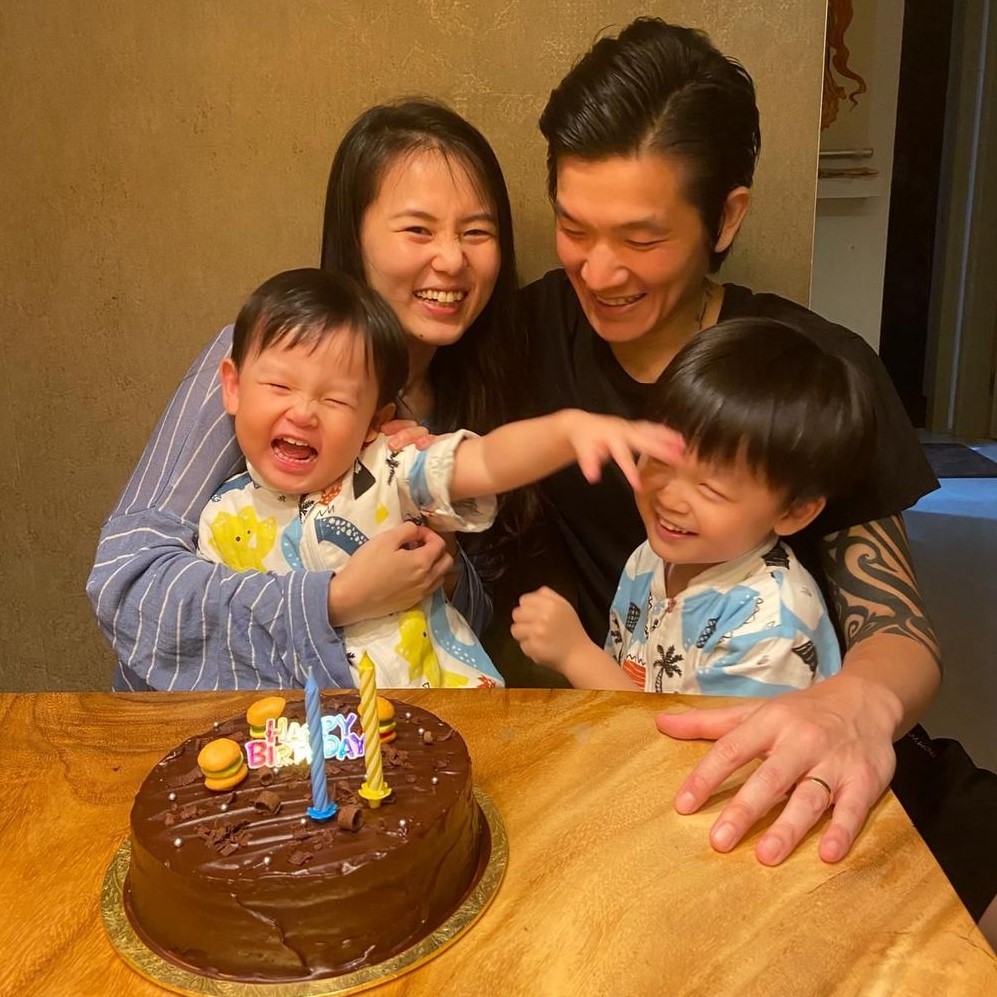 I have never regretted my decision to enroll both my boys into Little Footprints. I was blown away by Ms Jerrica's firm yet sincere disposition, with her passion in childhood education. Two years on, I have truly known and appreciate her and the teachers there that I trust with my boys, now 5 and 3.

My elder son, Jarien, was quite an introvert and took a few months to get used to school, but now he really enjoys going there. My younger son, Jach, has just started school this year and being more of an extrovert, he has already begun to enjoy school and tells us the things that he learned everyday. Special thanks to Ms Corinne, Ms Kate and Ms Praise. Tang laoshi and Cang laoshi were amazing in teaching mandarin too. I even love aunty Susan, the chef of the house who is so lovable and good with the children!

All the teachers are very responsible, sincere and reliable. All in all, Ms Jerrica manages and treats the team really well, which results in a very cohesive and happy family working together to guide the young ones professionally with sincere hearts. My husband and I are happy parents.

Harriet and Jason, Parents of Jarien and Jach Khiang 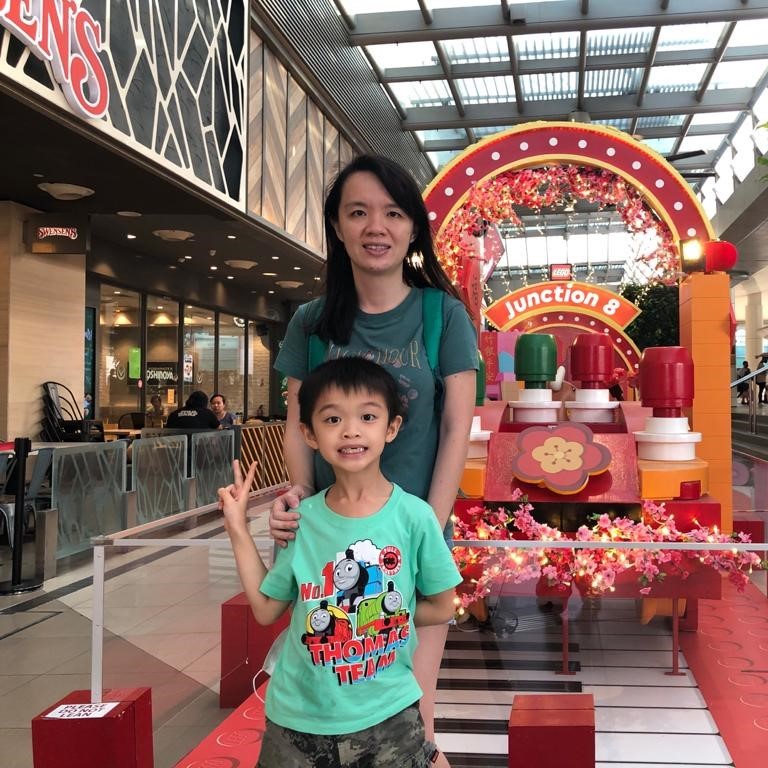 Ivan was initially weak in Chinese and have no interest in learning. With his teacher’s help, we were amazed to see tremendous improvement in just a few months

Subscribe with your email to receive
our latest news and updates.